From 1st to 9th August, the EcoACT team and 35 participating farmers attended Nane Nane in Dodoma – this year’s headquarters for the national agriculture exhibition in the Central Zone of Tanzania. 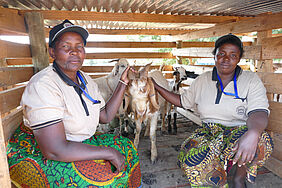 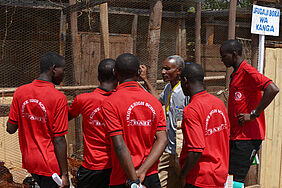 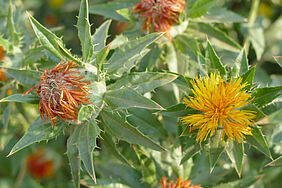 Katam Safflower produces oil (like sunflower oil) and has small thorns that deter birds from attacking. 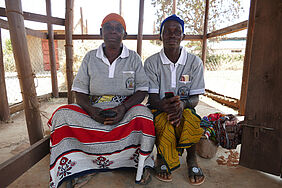 Sarah Muhoga and Masa Malongo, who rear livestock in Idifu ward, Chamwino, were at Nane Nane displaying their goats and chickens. 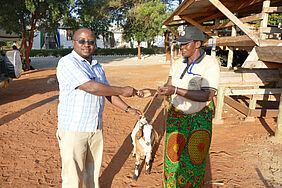 Jerry Masianga sells one of her blended goats to a visitor at her pavilion.

The Tanzania Organic Agriculture Movement (TOAM) is one of seven agencies implementing the Ecovillage Adaptation to Climate Change in Central Tanzania (EcoACT) project. The project aims at increasing the capacity of vulnerable rural Tanzanian communities to adapt to the adverse effects of climate change, and reduce poverty.

From 1st to 9th August, the EcoACT team and 35 participating farmers attended Nane Nane in Dodoma – this year’s headquarters for the national agriculture exhibition in the Central Zone of Tanzania. The primary objective was to showcase the practices and technologies that have made villagers of Idifu, Miganga, Kikombo and Chololo resistant to the effects of climate change. Project stakeholders were also able to explore the exhibition grounds and learn from the experiences of others in the region. Of the 39 farmers, 31 attended as visitors and 8 were exhibitors.

On display at the EcoACT pavilions were handmade leather goods, Quality Declared Seed (QDS) produced by farmers and improved breeds of cattle, goats and chickens. Agricultural Extension Officers were also at the exhibition showcasing the good agricultural practices that they have been passing on to farmers through the project. These include correct spacing, planting in rows, intercropping and tillage of the soil. The project’s draught tolerant crop varieties of Sorghum (Naco, Mtama 1 and Macia varieties), pearl millet and Sunflower (Record variety) were also on display in exhibition plots.

Among the main attractions for visiting EcoACT farmers at Nane Nane were the array of solar technologies and financial services as well as the livestock parade.

Dodoma Municipal Agriculture Extension Officer, Hofu Mwakaja, told us that a particular crop caught the eye of several farmers: “Katam Safflower produces seeds that can be used to make oil (like sunflower oil). The plant has thorns so birds don’t attack. Farmers were very impressed as currently they face the challenge of birds attacking their sunflower just as the flowers are maturing.”

This wasn’t the only attraction of the Nane Nane ground demo plots. Most attending farmers identify areas that are of particular interest to them depending on what they have on their own farms. For instance, vegetable farmers from Kikombo ward were impressed by the demonstration vegetable crops and irrigation systems. For Masa Malongo the visit was an opportunity to reconnect with her past. “I have bought five cashew tree seedlings … 30 years ago, my father used to grow cashew”.

One of the key components of the EcoACT project is that it creates resilience amongst participating villagers by creating added income earning opportunities. Farmers attending Nane Nane didn’t let the exhibition go by without taking advantage of the exposure to sell their goods. Goods sold by those attending included leather belts and sandals, and blended chickens and goats.

“Even here at Nane Nane they are selling something… if you fail to get crops (due to drought) then at least you will get something from your livestock” – Juma Suru, EcoACT project coordinator, Chamwino District.