This September, the EcoACT project has been engaging 50 young people from Chamwino and Dodoma Municipal Council Districts in workshops on solar appropriate technology (SAT). 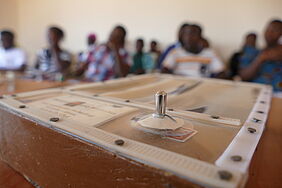 A close-up picture of a solar lamp, made mostly using locally available materials. 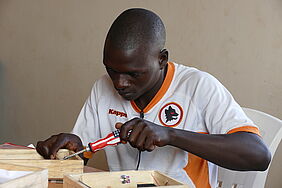 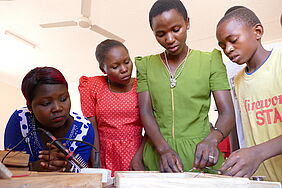 Leaders were selected from within the class to demonstrate some of the more complex aspects of solar technology assembly. 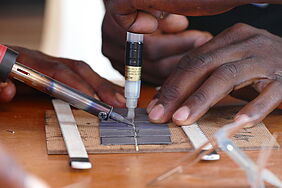 When soldering, one person is required to keep the solar cells steady, another to apply the flux liquid and a third to operate the solder iron. 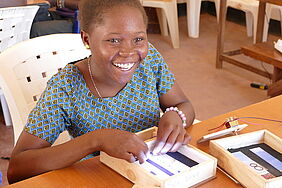 A student’s face lights up as she tests the connection of her LED lights with a rechargeable battery. 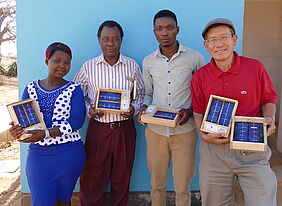 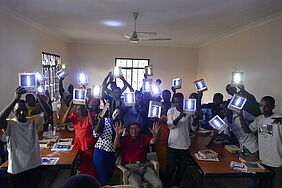 Every student successfully made both a solar lamp and a solar phone charger.

The Tanzania Organic Agriculture Movement (TOAM) is one of seven agencies implementing the Ecovillage Adaptation to Climate Change in Central Tanzania (EcoACT) project. The project aims at increasing the capacity of vulnerable rural Tanzanian communities to adapt to the adverse effects of climate change, and reduce poverty.

This September, the EcoACT project has been engaging 50 young people from Chamwino and Dodoma Municipal Council Districts in workshops on solar appropriate technology (SAT). SAT is solar technology that meets the needs of rural people, can be made and repaired using mostly local skills and materials and is affordable.

The coach for the two workshops – one in Idifu ward and another in Chololo – is Dr. Hong Kyu Choi. Doctor Choi studied solar technology in South Korea and the USA before honing his skills developing solar technology that is appropriate for use in rural Tanzania for the past seven years. In fact, Dr. Choi says that he gets his inspiration from Tanzania’s National Vision (2025) as well as the philosophy of Mw. Julius Nyerere who said that “If real development is to take place, the people have to be involved”.

In the workshops, students first learn about the theory of solar technology before engaging their knowledge and developing practical skills by creating a solar lamp and solar phone charger. Participants learned technical skills including soldering, fitting LED lights onto a circuit board, connecting solar cells, and wiring an electrical circuit. It was vital for participants to work as a team because lots of the steps require cooperation.

Students were encouraged to take ownership of what they were making and were invited to take their new technologies home with them. According to Dr. Choi, it is this ownership that ensures a longer lifespan for both the lessons learnt and the solar technology itself. In the past, Dr. Choi would make similar solar products and give them to people for free, but he found that beneficiaries would not take care of the units properly unless they had been involved in making them and understood how they work.

As one of five projects in Tanzania funded by the European Union’s Global Climate Change Alliance phase two (GCCA2), the EcoACT project aims to increase the capacity of vulnerable rural Tanzanian communities to adapt to the adverse effects of climate change, and reduce poverty. Solar power is a particularly relevant source of energy for rural dwellers in Dodoma because the region experiences strong and consistent sunshine. With few villagers having access to electricity in their homes, many have to pay shopkeepers to charge their phones and children struggle to study in the evenings without light at home (the sun sets before 7:00pm in Dodoma throughout the year). With a reliable source of energy and a new income earning opportunity, solar appropriate technology will make Dodoma’s residents more resilient to an increasingly unpredictable climate.

Those trained are optimistic that they now have the capacity to set up small enterprises manufacturing solar appropriate technology for the villagers of Chamwino and Dodoma Municipal Districts.

The solar component of the EcoACT project is being implemented by the Tanzania Organic Agriculture Movement (TOAM). For more information, contact Dr. Choi at: solarmissionafrika2025@gmail.com or Stephen Boustred at: stephen.boustred@kilimohai.org