This week's bulletin is about the successful launch of the Seeds of Freedom documentary and TOAM participation at Nanenane. 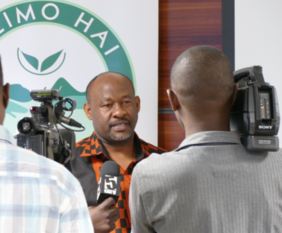 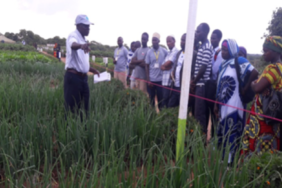 On 10th August this year, TOAM launched a documentary! ‘Seeds of Freedom’, in swahili: ’Uhuru wa Mbegu za Wakulima’, captures the testimonies of farmers whose customary rights to save, share and exchange seeds, are threatened by seed laws designed to replace traditional varieties with commercial hybrids and handover control to the global seed companies. The 28-minute film follows a local seed producer, Mathias Mtwale, as he meets with farmers, researchers, seed suppliers, regulators, and legislators to understand the issues, and to make the case for a fair deal for the farmers.

The launch caused quite a stir in the media with stories from Habari Leo, Daily News, Majira and the Guardian Newspapers covering the event and the seed issues raised in the film: fake seeds, the lack of support for the farmer managed seed system, quality declared seed and how government can help to protect farmers’ indigenous seeds.

On NaneNane (the national Farmers’ Day - 8th Aug) the film was previewed on Azam TV’s ‘Morning Trumpet’ breakfast show, showing clips from the documentary alongside an interview with TOAM CEO Jordan Gama. Four TV stations (Channel 10, TBC, EATV and Azam TV) also reported the launch event and aired clips of the film in their news bulletins. Star Television went further showing a short version of the film on Mkulima Wetu (our farmer) a documentary program covering farmers and their activities aired on Friday evenings.

TOAM farmers from Masasi in Mtwara participated in this year’s Nanenane National Farmers’ Exhibition at Ngongo in Lindi region from 1st to 8th August. TOAM arranged an organic pavilion, providing informative, interactive displays and demonstrations. On display were a sample of organic products and promotional materials explaining organic agriculture and the East African Organic Products Standards (EAOPS). The event was also used to project video clips of successful organic practices, and visitors engaged in discussions to learn more about organic agriculture. TOAM managed to get 15 minutes of airtime on Mashujaa FM radio in Lindi and a 20-minute slot on TBC1 during the exhibition.

Farmers supported by TOAM to attend were able to meet with other farmers, processors and some value chain service providers from other pavilions and demonstrations. They shared knowledge and experiences on value addition and processing under the EAOPS and branding with the Kilimohai Mark. TOAM encouraged farmers and processors visiting Nanenane to follow EAOPS in their production and processing and benefit from access to organic certification for local and regional markets. Some of the pavilions TOAM staff visited include: JKT, AGHAKAN Foundation, TAHA, MALF, TBS, TFDA, TANTRADE and the district pavilions of Lindi, Tandahimba, Newala, Nachingwea and Mtwara. Farmers were encouraged to make the most of the learning opportunities available.