This week's bulletin is all about communication and awareness campaigns. We bring you feedback from last week's Ecological Organic Agriculture Initiative (EOAI) planning meeting in Morogoro, and let you now about last month's Food Revolution Day. 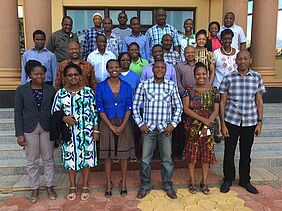 EOA Pillar members including TOAM CEO Jordan Gama, pose for a group photograph during the planning and reflection meeting in

“on one hand we’ve got millions of kids being severely undernourished, and on the other hand, more and more Tanzanian kids are becoming obese – if we’re going to combat this crisis we have to do it as one.” - Ali Kiba

Ecological Organic Agriculture Initiative for Africa (EOAI) is an African?led program aimed at implementing the commitments of African Heads of State to support Organic Agriculture. The African Union Commission, with other stakeholders, designed this Initiative to be domesticated and mainstreamed into Country Programs, Policies and Strategies.

Tanzania is among eight countries in Africa implementing the Initiative since 2012, and Tanzania Organic Agriculture Movement (TOAM) is the Country Lead Organization (CLO) of EOAI in Tanzania.

At the EOA planning and reflection meeting held at Flomi hotel in Morogoro (23rd ­? 24th may 2016), members of Ecological Organic Agriculture Initiatives agreed that local media, such as community Radio and TV, are a major solution for conveying EOA informa1on and messages to communities in project and non­?project areas.

Members agreed to use this approach as a solution to tackle the challenge of using large?scale, prominent but extremely costly media. Thinking outside the box when disseminating information to reach large communities than only relying on few media will be particularly crucial in Pillar II, the information and communication pillar of the project.

The use of live talk shows in radio and on television provide huge opportunities for stakeholders to quickly respond to issues and broadcast opinions and information to communities. Linking with the Government agriculture education programs, which use cinemas in villages, also helps to convey a message to large communities.

“Identifying the appropriate channel, packaged in a very friendly and easy way, will help EOA initiatives to be adopted by many farmers and communities” said TOAM CEO and AfrONet president, Mr.Jordan Gama during the EOA meeting.

British celebrity chef and food campaigner, Jamie Oliver launched the global Food Revolution in 2010 to tackle issues surrounding what we eat, including obesity, malnutrition, food waste and climate change. The campaign is centered around generating debate on these much-ignored issues.

In Tanzania, 16 percent of Children are considered to be underweight whilst 9 per cent of boys and 12 per cent of girls under the age of 20 are classed as overweight and obese (2013). National singing sensation Ali Kiba and leading television cookery personality Marion Elias took the baton with a 30-minute stint teaching several new recipes and calling on Tanzanians to sign up to the revolution.

A video of the event posted by Ali Kiba on his Facebook page has been viewed over 72,000 times. The fact that Tanzanians are interested in this campaign bears significance to organic agriculture proponents. With the right message and support, it is possible to generate successful food/ health campaigns that reach the people.