This week's bulletin is about the evidence behind the health benefits of organic food. The bulletin also informs readers of an upcoming seminar on GMOs. 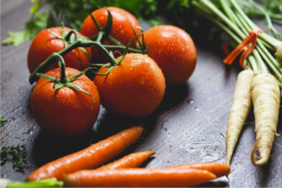 The term conventional farming generally refers to intensive agriculture, typically with the use of synthetic pesticides and mineral fertilizers in crop production and close-housing and concentrated feeding in animal production. Organic agriculture, in contrast, includes the use of organic fertilizers such as farmyard and green manure, ecological and non-chemical measures for pest control and giving livestock access to open air and roughage to feed on.

Feeding the population with sustainable and healthy food is a high priority for many governments and international organizations. The choice of either conventional or organic farming methods can affect the sustainability of food production and both human and animal health. Researchers of organic farming performed a comprehensive review of the existing evidence on the health benefits of organic food.

What is the Evidence of Health Benefits of Organic Food?

The researchers looked at evidence from population studies and clinical trials comparing people who eat mostly organic products with those who consume mostly conventionally produced products. In addition, they looked at studies on the impact of organic versus conventional farming methods on human pesticide exposure, the nutritional composition of crops and animals, and the use of antibiotics in animal production.

Effects on Human Illness: Few human studies directly investigating the effects of organic food on health suggest that people who consume mostly organic food may have a lower risk of childhood allergies, weight gain, obesity, and some forms of cancer. However, it is not possible to conclude from these studies that organic food is the direct cause of these benefits, as people who chose to consume organic food were also noted to have healthier lifestyles overall.

Organic farming generally relies on preventive and biological means of plant protection, such as crop rotation, intercropping (growing more than one crop together), using pest-resistant varieties of plants, introducing natural enemies of pests, and other measures. Some pesticides are approved for use in organic agriculture, but most of these are of low toxicity to consumers because they are human nutrients (e.g. spearmint oil, quartz sand), or are only approved for use in insect traps so are not in contact with the crops. Organic agriculture methods mean that there are lower pesticide residues in food. Consumers of mostly organic food have a comparatively low dietary exposure to pesticides.

On Tuesday 27th, the Tanzanian Commission of Science and Technology (COSTECH) will be holding a seminar to discuss GMOs. The event, entitled “GMO Seeds: Boon or Doom?” will include presentations and discussion as well as an opportunity for networking and refreshments.

The programmer begins at 4:30pm and runs until 8:30pm. All are welcome to this event.