Concerned about food safety and human health, the European Parliament commissioned Harvard Chan School’s Philippe Grandjean to co-author a study on the health benefits of organic food and agriculture. 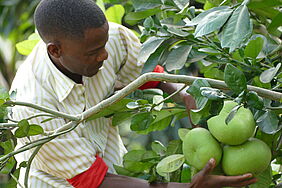 Concerned about food safety and human health, the European Parliament commissioned Harvard Chan School’s Philippe Grandjean to co-author a study on the health benefits of organic food and agriculture.

The study engaged with experts from several countries, asking them to review the possible health benefits of organic food and organic farming.

The most important information in the report refers to pesticides. Residues of these conventional farm inputs remain on foods, even after they are washed by the consumer. Organic products however are produced virtually without pesticides.

Maximum Residue Levels* (MRLs - established quantities for pesticides residues not to exceed) are upheld by the EU, the US and Japan among others. MRLs are set based on animal trials. This report argues that this not sufficient, as animals and humans are very different biologically. The study refers to previous research, linking pesticide traces measured in the urine of pregnant women to worsened intelligence and behavioral development in their children. On this, the author doesn’t hold back: "My strong advice is that pregnant and breastfeeding women should eat organic rather than conventional food.”

The study also highlights that the conventional animal-rearing practice of relying on antibiotics for disease control has been proven to lead to antibiotic resistance in bacteria. This is a major public health threat as this bacteria can spread from animals to humans.“On organic farms, the preventive use of antibiotics is restricted and animals are given more space to roam in natural conditions, which lowers their risk for infections.”

The report lists several policy options for the European Parliament to consider if they choose to support and extend organic food production. These include decreasing or waiving taxes on organic food, reducing taxation on organic farmers, and supporting more research to increase understanding about the benefits of organic products.

We hope that the Tanzanian government will also heed this call for support to organic farmers and consumers.

*In Tanzania, there is less control on pesticide use and some consider national MRLs to be unacceptable.